Find Your Chronotype to Improve
Sleep and Boost Productivity

Sleep patterns vary from person to person based on age, activity level and sleeping conditions. Chronotypes are a general way of classifying one’s sleeping pattern. “Chrono,” relates to time, and “type,” refers to one of four classifcations: the Lion, the Dolphin, the Wolf and the Bear.

Each animal corresponds with a certain type of person. Do you feel most productive during the day or at night? Do you take that afternoon nap or do you power through the day? Knowing your chronotype can boost productivity and help you listen to your body.

Instead of fighting your body with a sleep schedule that doesn’t work for you, it’s best to work with your chronotype. Understanding the advantages and disadvantages of a personal chronotype starts with knowing which one you are.

So let’s dive in to find out if you’re a bear, wolf, lion, or dolphin.

What Is a Chronotype?

A chronotype is a classification system to help understand sleep and productivity schedules. People typically fall into one of four categories: the Lion, the Dolphin, the Wolf and the Bear. Each chronotype is loosely based on the relative animals’ sleep pattern and habits. 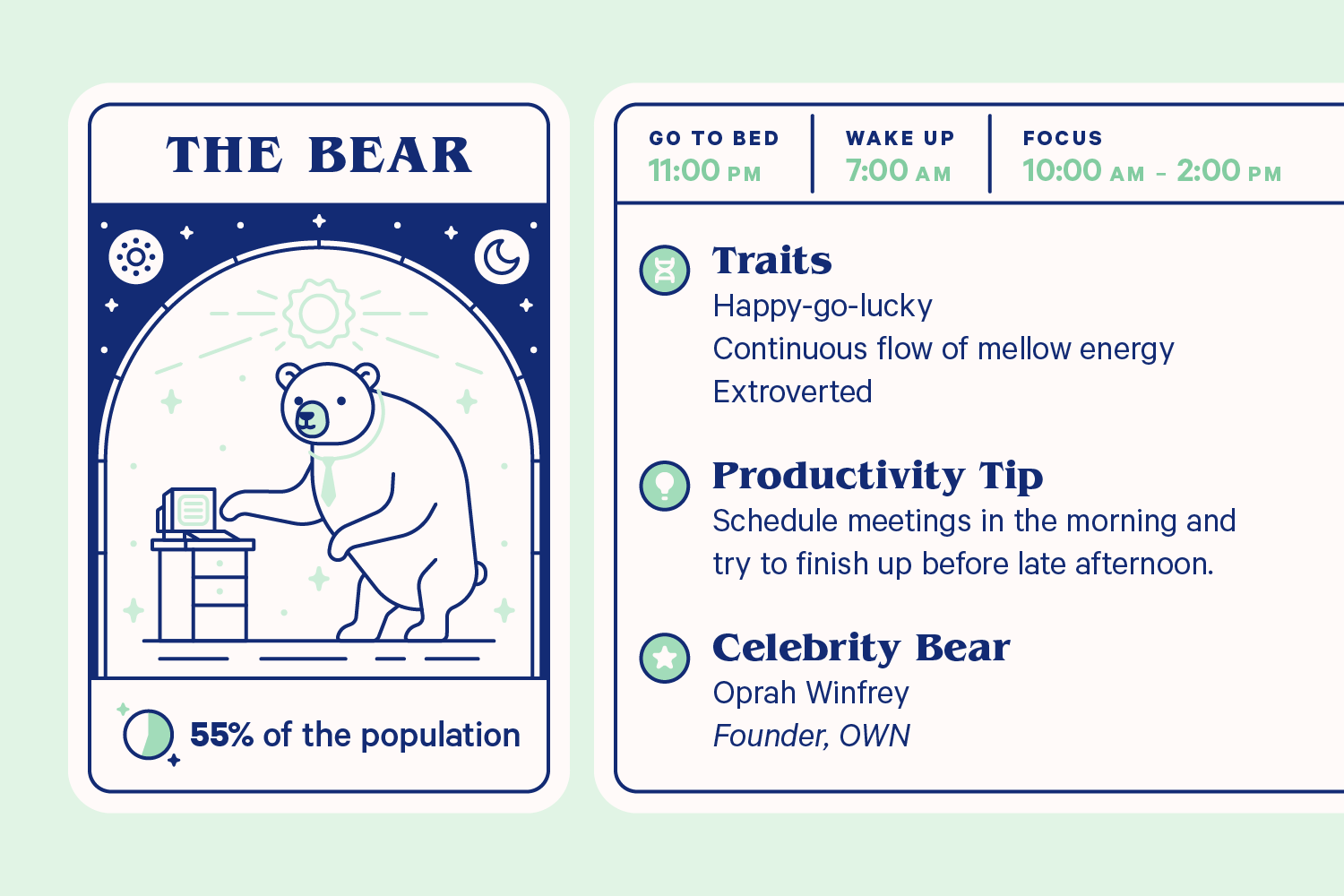 The Bear
The Bear chronotype follows the solar cycle. Eight hours of sleep is typical for a Bear, and normal sleep hours are usually between 11 p.m. and 7 a.m. This chronotype is most productive in the morning, and will typically struggle with an afternoon slump after lunch.

Fifty five percent of the population falls into this category. If Bear types fail to get enough sleep at night, they may feel lethargic throughout the day and go to bed earlier than normal. Typically, Bear chronotypes are extroverts and can maintain energy throughout conversations. 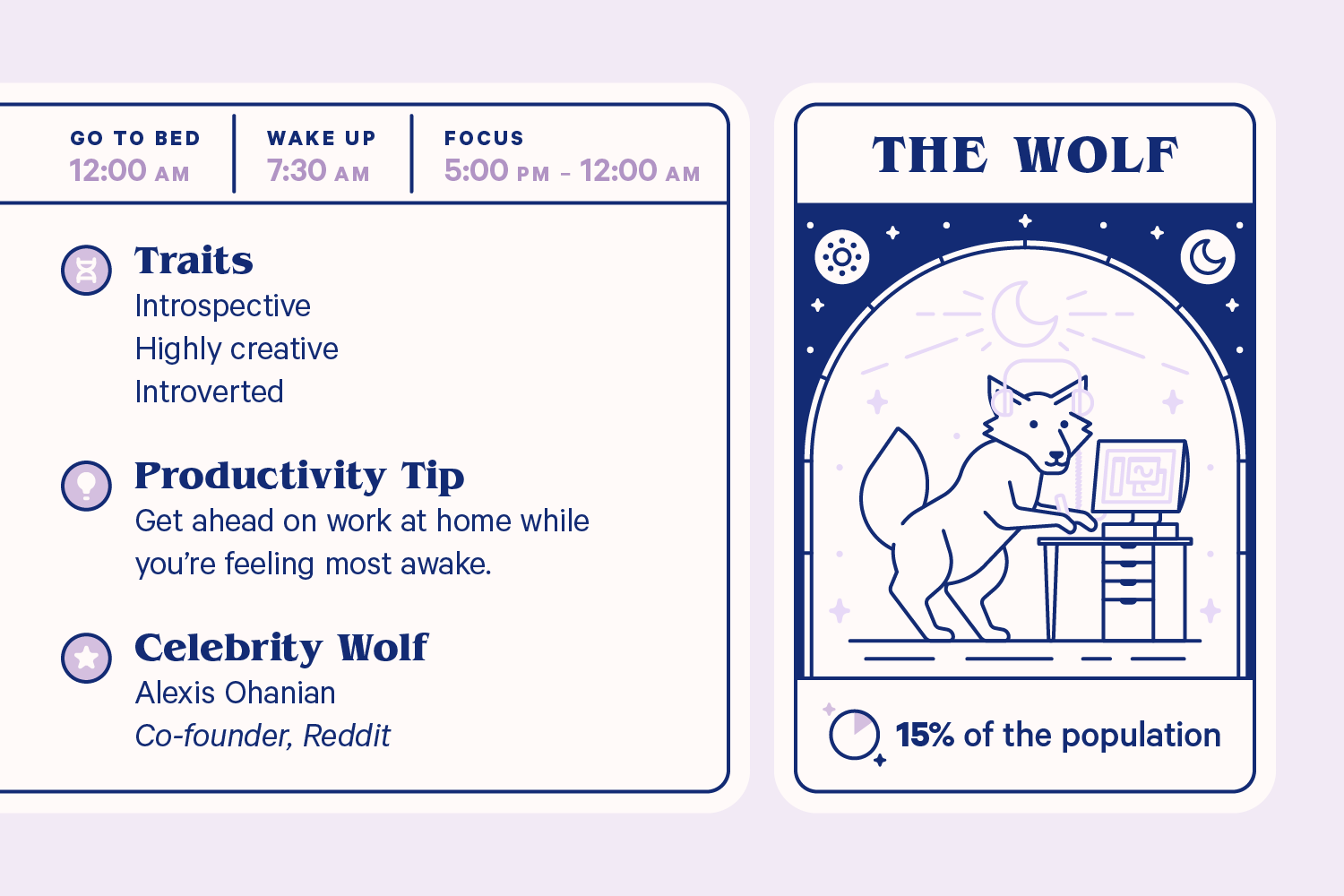 The Wolf
Just like their real life prowling counterparts, Wolf chronotypes are most productive at night. Similar to what is considered a “night owl,” this chronotype doesn’t get going until the sun sets, and they may have difficulty waking when it comes back up. Wolf types typically only consider going to bed once the clock strikes midnight.

Only about 15 percent of the population are wolves. This type of person is usually more reserved and introverted. Generally, this chronotype has two peak periods of work and creativity — around early afternoon and then again late at night. 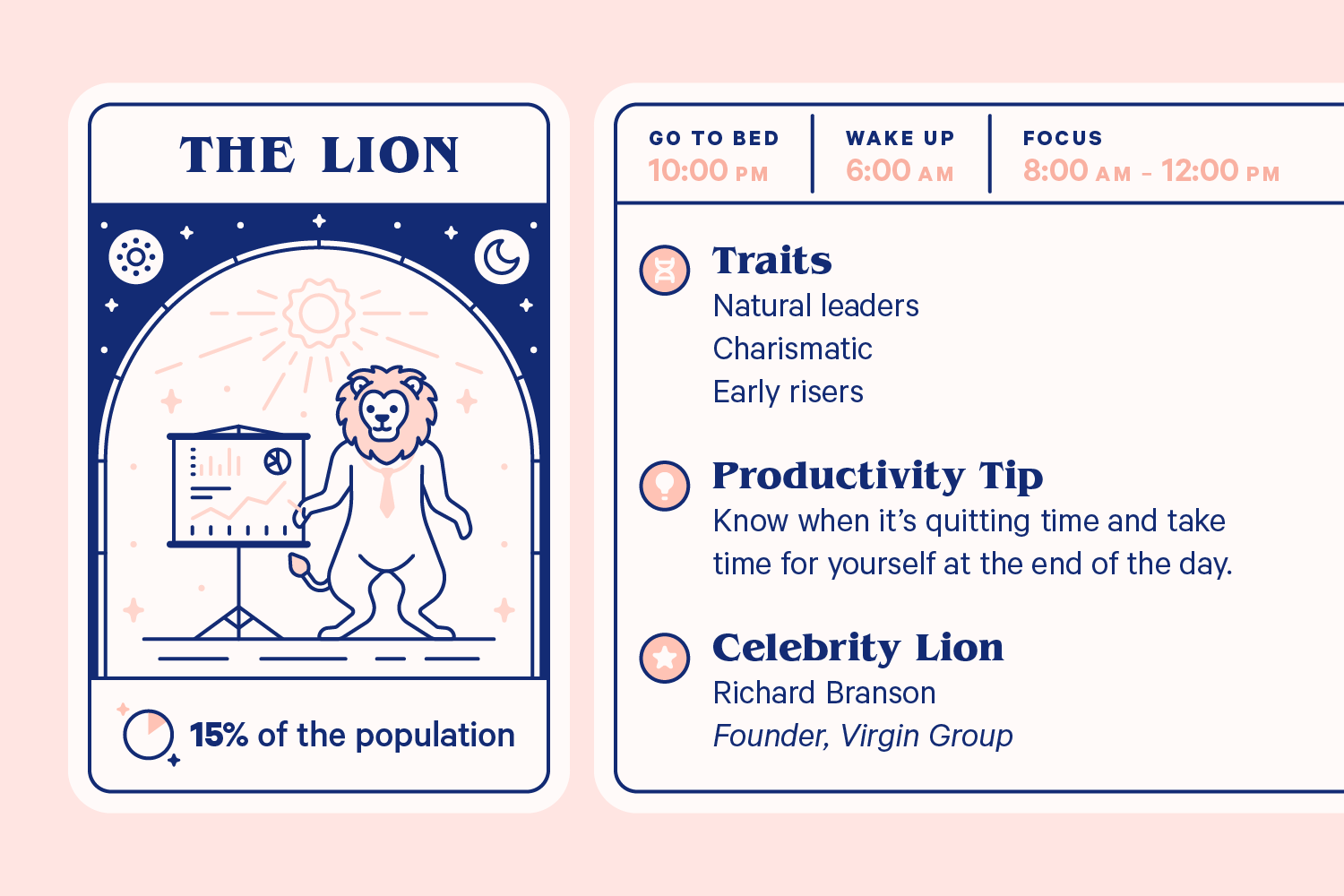 The Lion
Lions are early birds. This chronotype feels most alive in the morning and is typically able to complete massive amounts of work before lunch. Waking up early is a breeze for Lions and everything tends to run smoothly until midday. Just as fast as energy is gained, it’s lost for Lions. The afternoon slump hits this group hard and by the evening they feel drained.

Fifteen percent of the population considers themselves Lions. Usually seen exercising early and the first in the office, they’re early risers and have a lot of energy during their prime hours. Almost always type-A people, Lion chronotypes typically harness charisma and are seen as leaders by their peers. 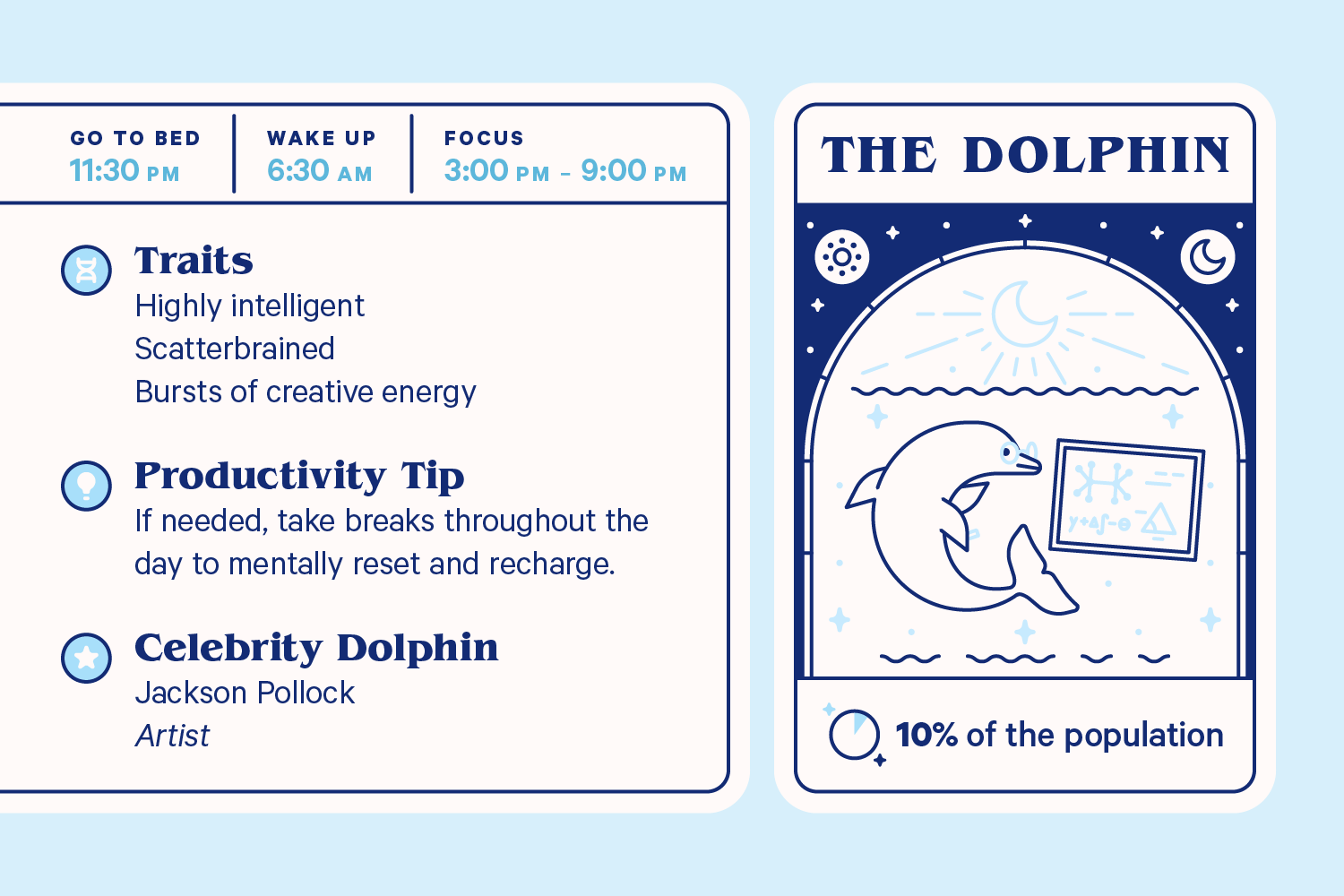 The Dolphin
Nature’s insomniac, actual Dolphins sleep with half of their brain on at a time — this helps them stay alert and aware of predators. The Dolphin chronotype is similar. Usually anxious, Dolphin types have a hard time falling asleep at night and rarely get a full night of sleep.

Productivity reaches its peak around mid-morning for this group, but there is always underlying tiredness. Dolphins have a hard time waking up as well. Because of their sporadic sleeping habits, it’s recommended they sleep from about midnight to 6 a.m.

Only 10 percent of the population is considered Dolphins. Generally highly intelligent, Dolphin types will ruminate about the day’s successes and failures while in bed. This chronotype can be seen as distant and uninterested during social interactions. Dolphin chronotypes fall asleep because their body needs to, not because they willingly give into sleep. 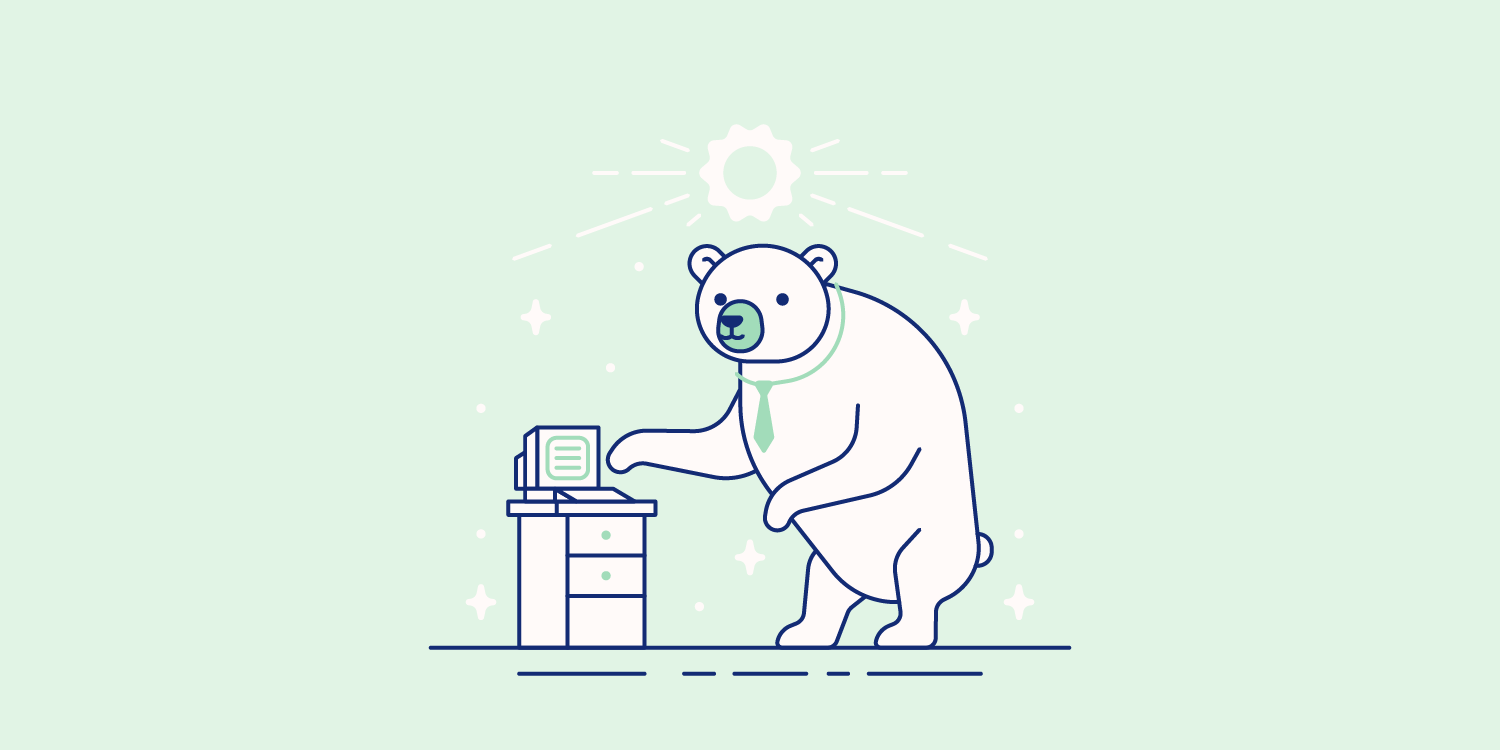 It’s important to note the difference between chronotypes and circadian rhythms when talking about sleep patterns. While similar, both play a unique role in sleep and can be looked at to understand one’s habits and boost productivity.

Chronotypes, on the other hand, are a guide to how circadian rhythms play a role in everyday life. They are typically seen as a productivity tool and can help you understand how sleep schedules affect your life.

Studies surrounding chronotypes started in the 1970s, and have since been expanded and standardized to the four animal chronotypes that exist today. These animals help group and generalize circadian rhythms found in nature. 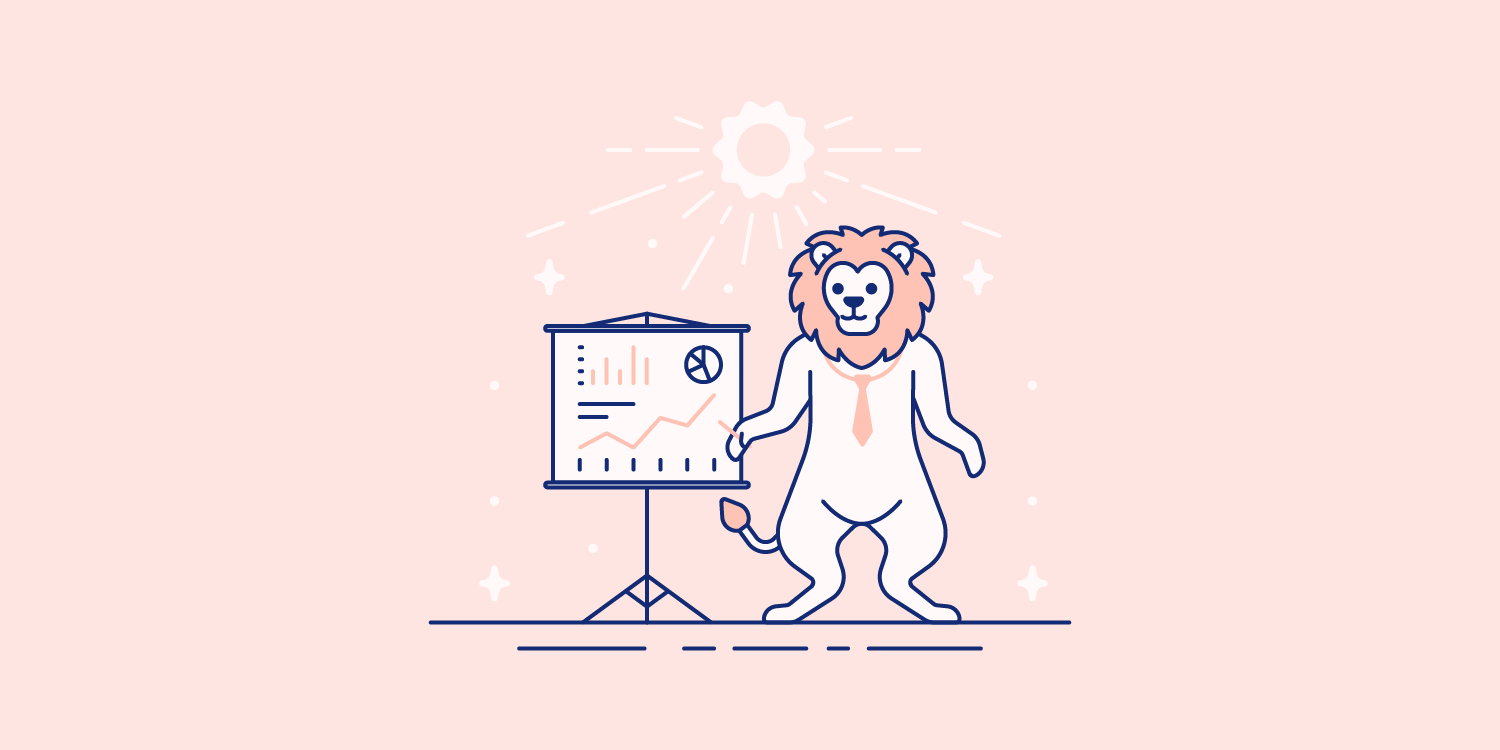 How Each Chronotype Can be Productive

Every chronotype has its strengths and weaknesses. Knowing when you’re going to be most productive will not only help make you more efficient, but also help you complete more tasks. It’s also important to know when it’s time to take a break and recharge. Below we cover when each type should load their schedules up for maximum productivity.

Bears
Bears work best during the morning and start to lose steam after lunch. Think of their productivity level like a bell curve. If you’re a Bear, ease into the day and ease out of it. The best time to schedule important meetings is mid-morning and anything after lunch should include easier tasks that require less intense thought and creativity.

Wolves
If you’re a Wolf, try to avoid early high-stakes pitches, creative briefs and other important meetings. It takes a while for this group to wake up and get going. Late afternoon and into the night is when the best work is done by wolves.

Seeing as this isn’t always possible during the work week, breaking up the day is important. Going for a quick walk in between tasks can help recharge the brain of someone with this chronotype. If possible, consider finishing tasks after dinner where you can be at a creative peak. 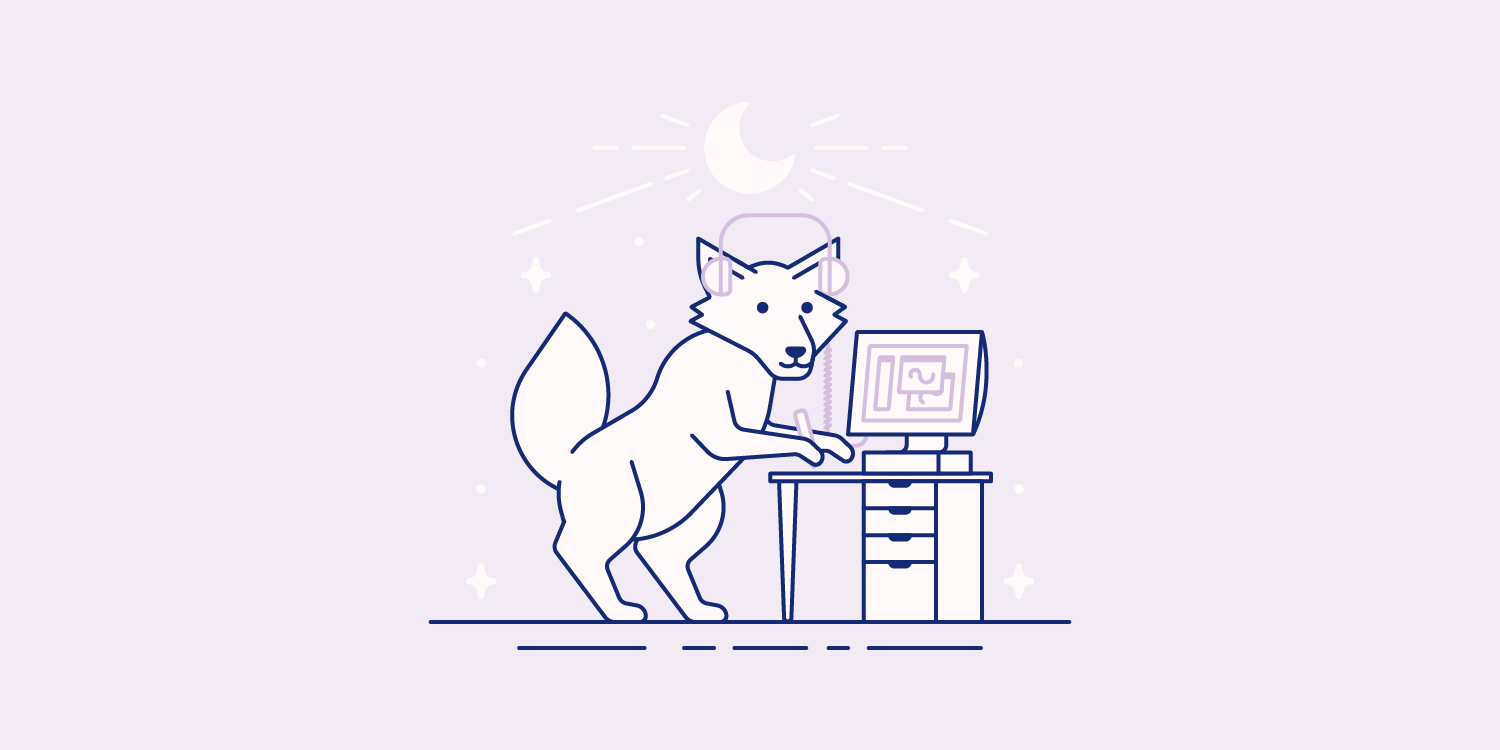 Lions
Up bright and early, Lions have the energy and time to get everything important out of the way in the morning. If you fall into this group, it’s essential to get all pressing tasks done in the early hours and avoid big meetings in the late afternoon if at all possible.

When a Lion is on, they’re on — but this energy fades quickly in the evening. To help keep energy flowing in the later parts of the day, full nights of sleep should be a priority for those in this group.

Dolphins
The best thing Dolphins can do is learn to conquer one thing at a time. Easing into the day with simple tasks will warm up the brain and help it get ready for more intense tasks. A Dolphin chronotype’s brain is always on, so it can be hard to nail down when the most effective time to work is.

Creative sparks can hit randomly throughout the day and it’s important to take advantage of them. When it’s time for bed, dolphins should unwind and avoid distractions that could keep them from getting shut-eye, considering it’s difficult to sleep as it is.

Can You Change your Chronotype?

That being said, there are steps you can take to slightly shift a chronotype and minimize the drawbacks of their own. First, eating at appropriate times can curb unwanted sleepiness.

A high-protein breakfast shortly after waking will get bodily cycles running and help metabolic functions work smoothly. Early, carb-loaded dinners will prepare the body for sleep by helping digestive functions happen before bed — not when one is trying to sleep. 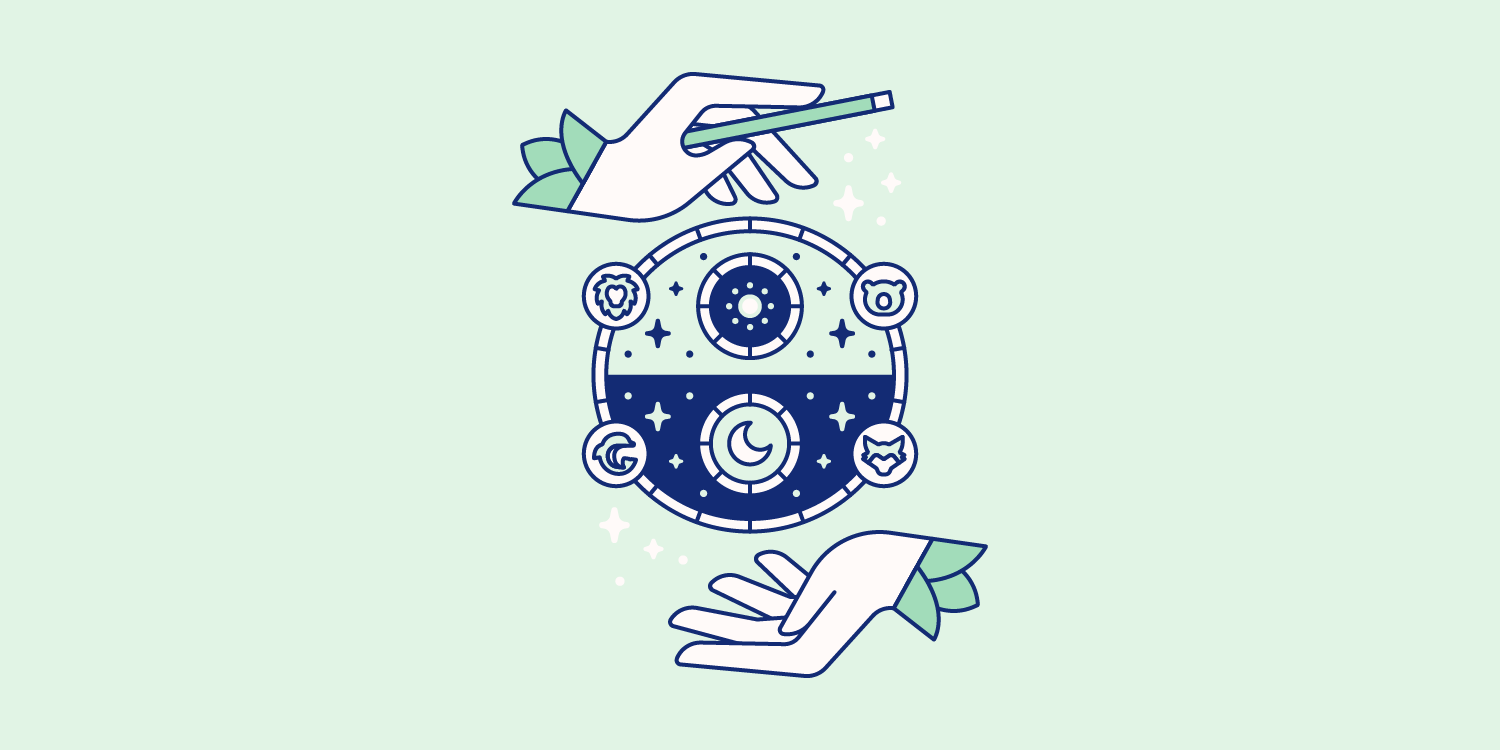 In addition, staying away from caffeine can help sync the body back up to a normal routine. While there may be a short-term positive effect to an afternoon coffee, these boosters can hurt a night’s sleep and evolve into a harmful cycle.

Lastly, going to bed and sticking to a set bedtime can truly help. While some chronotypes stay up later, if they slowly ease into a new, earlier bedtime, they can eventually feel more awake in the morning. The same is true if someone wishes to stay up later.

While chronotypes aren’t an exact science, they’re an interesting way to learn more about oneself. Generally, people will fall into one of the four categories, but it’s common to have subtle traits of more than one.

Circadian rhythms and chronotypes are relatively constant, but day-to-day energy has too many variables to define exactly when tasks should be completed. Hopefully you can use this guide to better understand your work tendencies and become more efficient in the process. Regardless of your type, it’s important to feel comfortable in bed and get a good night's rest.