What Is a Weighted Blanket?
23 Benefits and Uses

A weighted blanket is a heavy blanket used for therapeutic purposes. Usually around 15 pounds, these blankets are filled with heavier material and can produce a calming effect when placed on the body.

The blanket acts like a hug, using deep pressure to make the user feel more secure. Deep Pressure Stimulation (DPS) has been used to treat symptoms of autism, sensory processing disorder and depression. 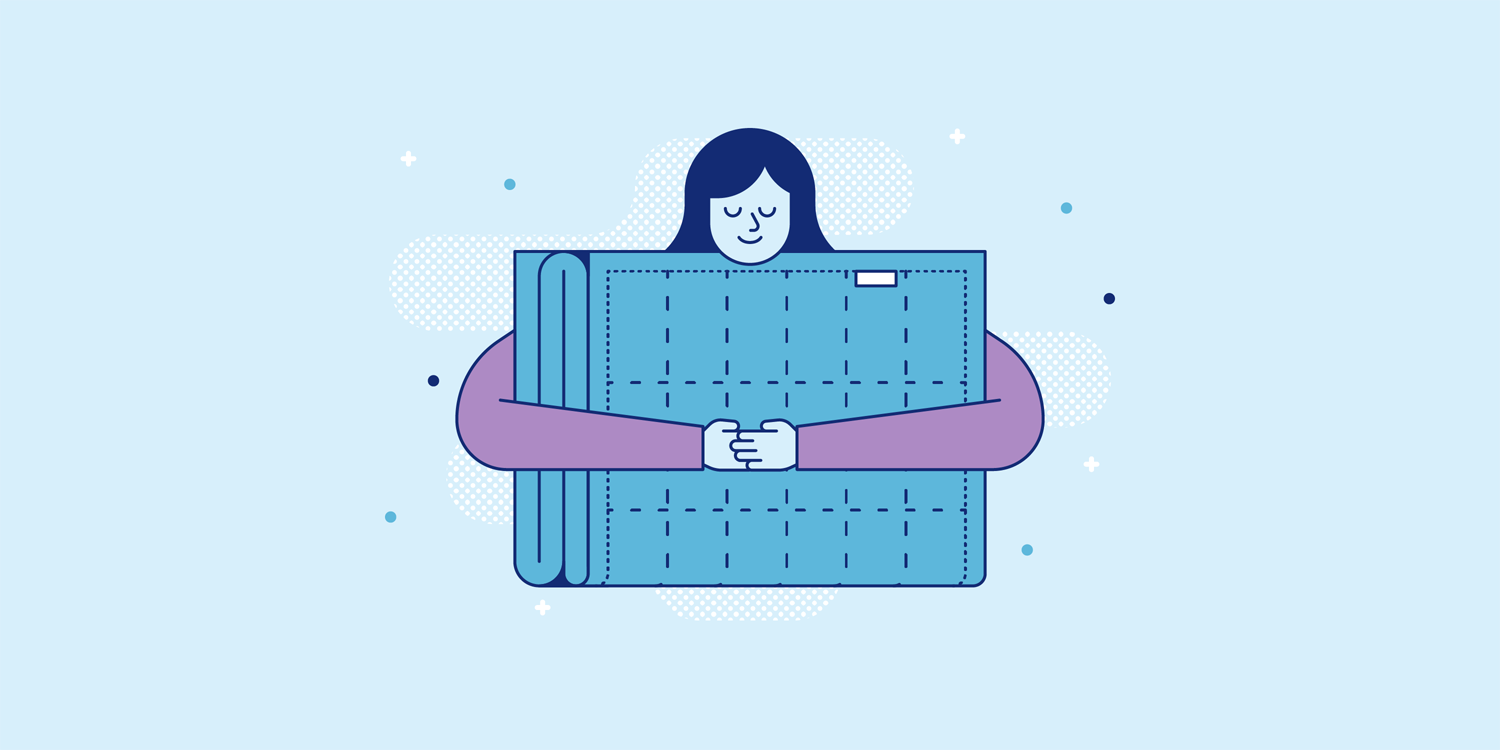 The Benefits of a Weighted Blanket

Stress, anxiety and many other conditions can prevent a good night’s sleep. While there are medications available to induce sleep, many people prefer to try a more natural approach first. A weighted blanket can help with a variety of issues. Here are a few:


2. Creates a Calming Effect
People who use a weighted blanket often report a calming modality and for this reason, it’s often used for people who are stressed or who have a disorder that makes them hyperactive. The blankets have been helpful for calming everyone from college students to animals! 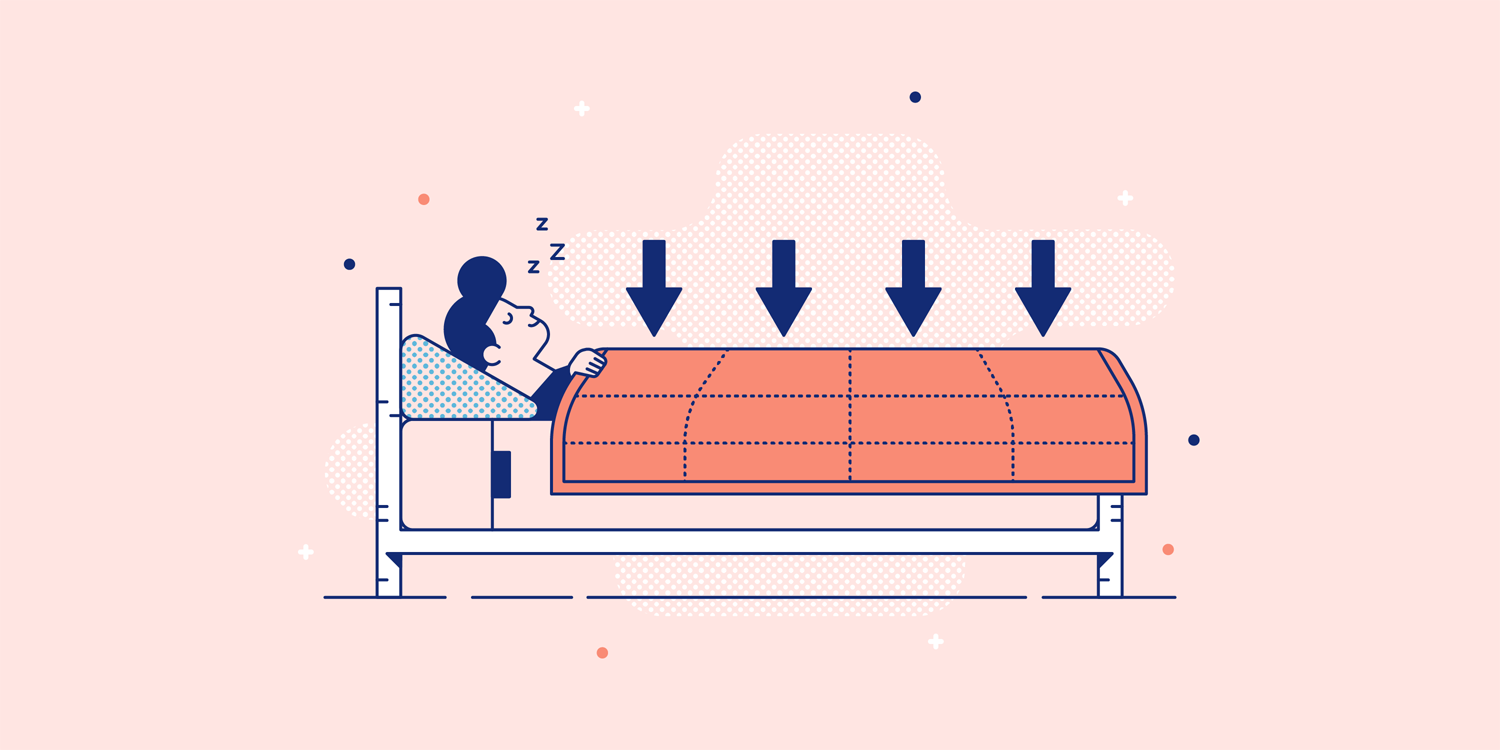 3. Improves Daytime Social Interactions
Weighted blankets have been found to improve social interactions during the day for users, mainly because they are able to get restful sleep the night before.

When a person isn’t able to get a good night’s sleep, it impacts every aspect of their life, including social interaction and performance in other areas. When a person gets their sleep back, they often get their life back too.


4. Eases Insomnia
As we’ve mentioned, weighted blankets are helpful when it comes to inducing sleep and improving sleep quality. For this reason, many people with insomnia find weighted blankets helpful. Studies show the use of a weighted blanket improves sleep in some children, and there is even a little evidence that it may improve sleep in adults.


5. Increases Serotonin
Serotonin impacts the sleep-wake cycle by regulating the sleep stages and impacting the depth of sleep. Deep pressure touch has been shown to stimulate the release of serotonin, helping the user sleep more peacefully and soundly. 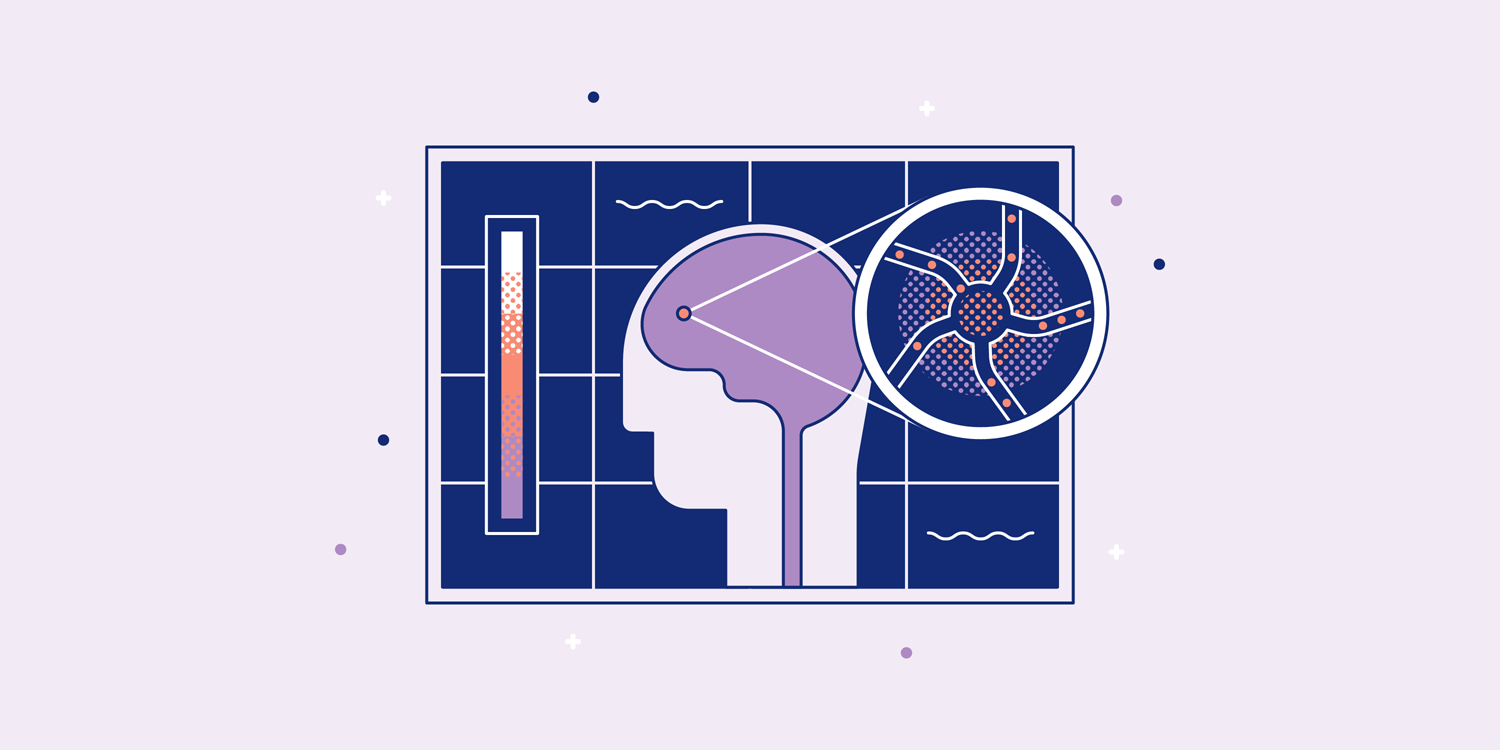 6. Treats PTSD
Weighted blankets have been successful in treating some of the negative symptoms of PTSD by relaxing the nervous system. This can help patients with trauma relax, feel more grounded and safe.


7. Decreases Nervous System Activity
When the autonomic nervous system is overactive, it can lead to anxiety, hyperactivity and a slew of other issues. Weighted blankets can de-active the nervous system and put it into "rest mode," mitigating the effects of these conditions. 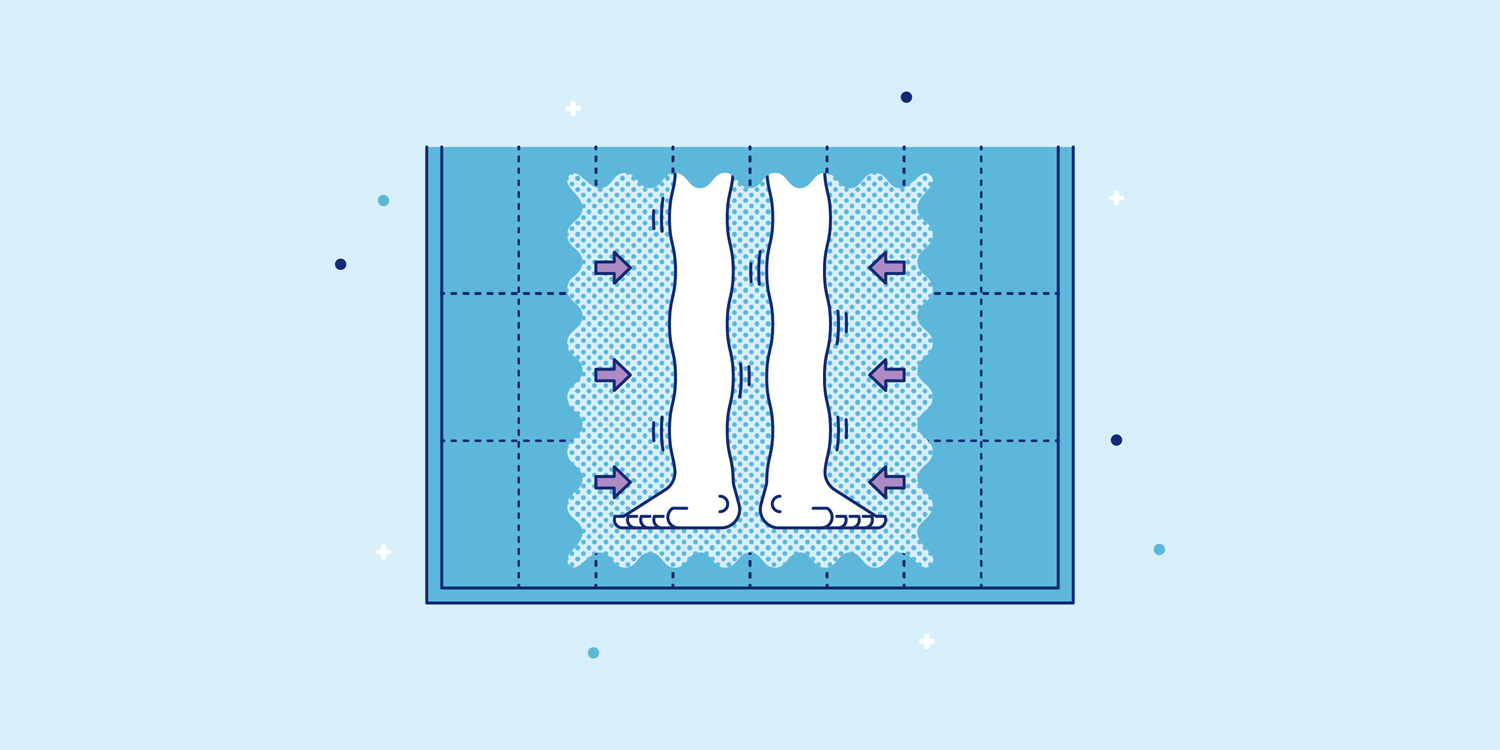 9. Eases Symptoms of Restless Leg Syndrome
Restless leg syndrome (RLS) is a condition that causes involuntary and rapid movement of the legs. This tends to happen when the person affected is trying to fall asleep. It’s been noted that applying pressure to the extremity of the legs for a significant amount of time can decrease symptoms of RLS.


10. Helps With Fibromyalgia
Users with chronic pain such as fibromyalgia have found comfort from the use of a weighted blanket. The blanket can help ease symptoms while helping to break the cycle of anxiety and depression that often accompanies the illness.


11. Reduces Heart Rate
Touch therapy has been found to decrease heart rate. A weighted blanket simulates touch therapy, providing similar benefits. The calming, grounding effect can be helpful to stop symptoms of anxiety or other illnesses that induce a quickened heart rate. 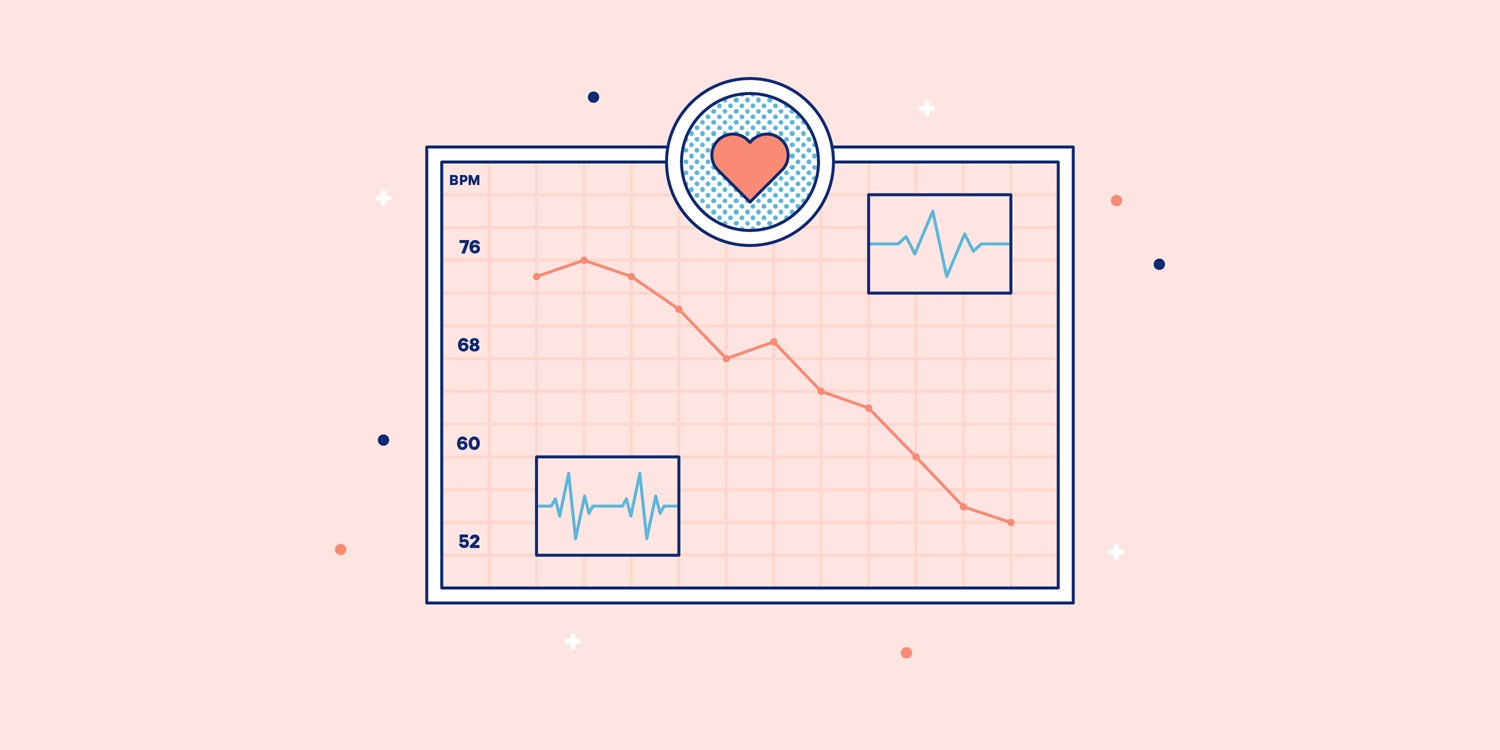 12. Increases Focus in the Classroom
Students with attention deficit hyperactivity disorder (ADHD) have found DPS to be very helpful. Participants in one study found that when they wore a weighted vest, task completion improved, as did attention to the task and overall behavior.


13. Lowers the Incidence of Seizures
Not all individuals who use a weighted blanket will report the same benefits, but potential positive effects include reduced incidence of seizures. DPS has positive impacts on the parasympathetic nervous system, allowing the body to experience an overall sense of wellbeing.


14. Improves Communicativeness
Another observed benefit of DPS includes increased communicativeness, particularly in children on the autistic spectrum. The feeling of safety and grounding may have something to do with this benefit. 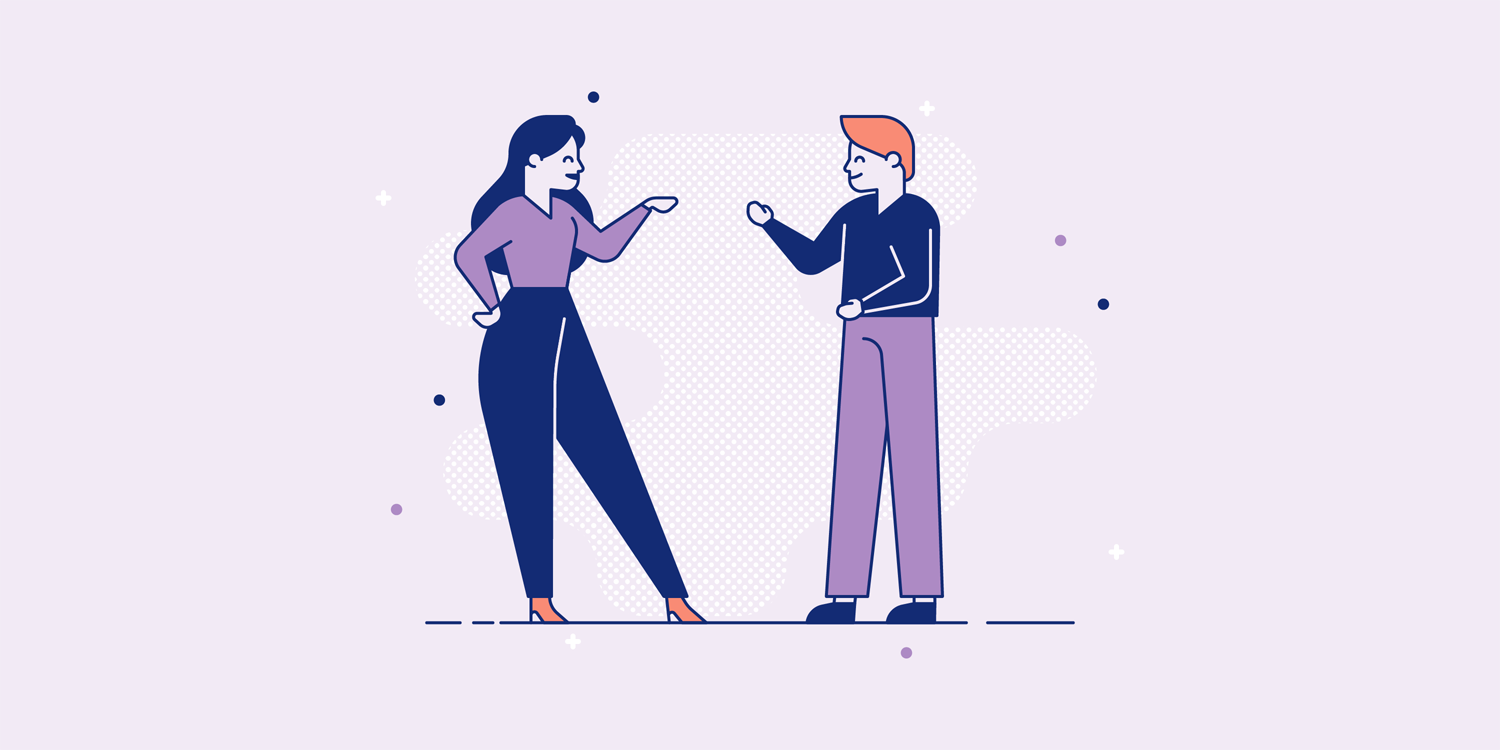 15. Soothes Panic Disorder
Heavy blankets and vests have been shown to decrease panic attacks and prevent crisis states in people of all ages. This allows them to lead more normal lives, get better sleep and improve in many other areas.


16. Increases Feelings of Security
Weighted blankets, especially when wrapped around the body to create a swaddling effect, have demonstrated increased feelings of security. This feeling can help generally with better sleep and even help with sleep anxiety.


17. Can Ease Alzheimer's Symptoms
One common symptom of Alzheimer’s disease is depression, affecting between 5 and 20 percent of patients. Fear and fatigue can manifest when people with Alzheimer’s try to make sense out of the world and aren’t able to. A weighted blanket has been shown to decrease these feelings of depression and anxiety in some cases. 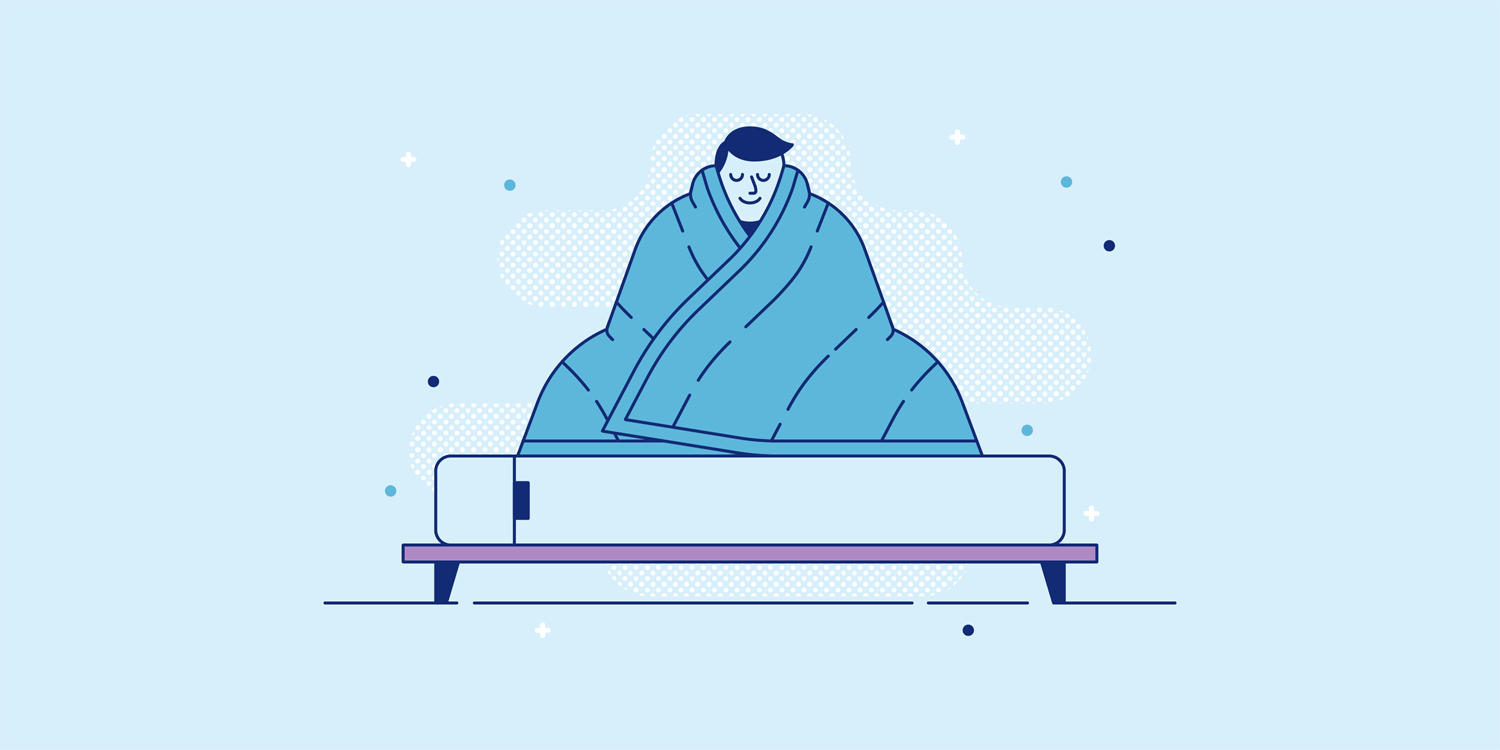 
19. Eases Symptoms of Autism
Another common use of weighted blankets is to lessen negative symptoms for those with autistic spectrum disorder (ASD). Studies show that touch therapy can relieve ailments like muscle spasms and social anxiety. A weighted blanket may provide similar effects.


20. Calms People With Sensory Disorders
Many parents of children with sensory disorders find that weighted blankets are a good tool to have on hand. This is because of the feeling of comfort and security they provide. The therapeutic relief of a weighted blanket can also extend to those with other developmental disorders. 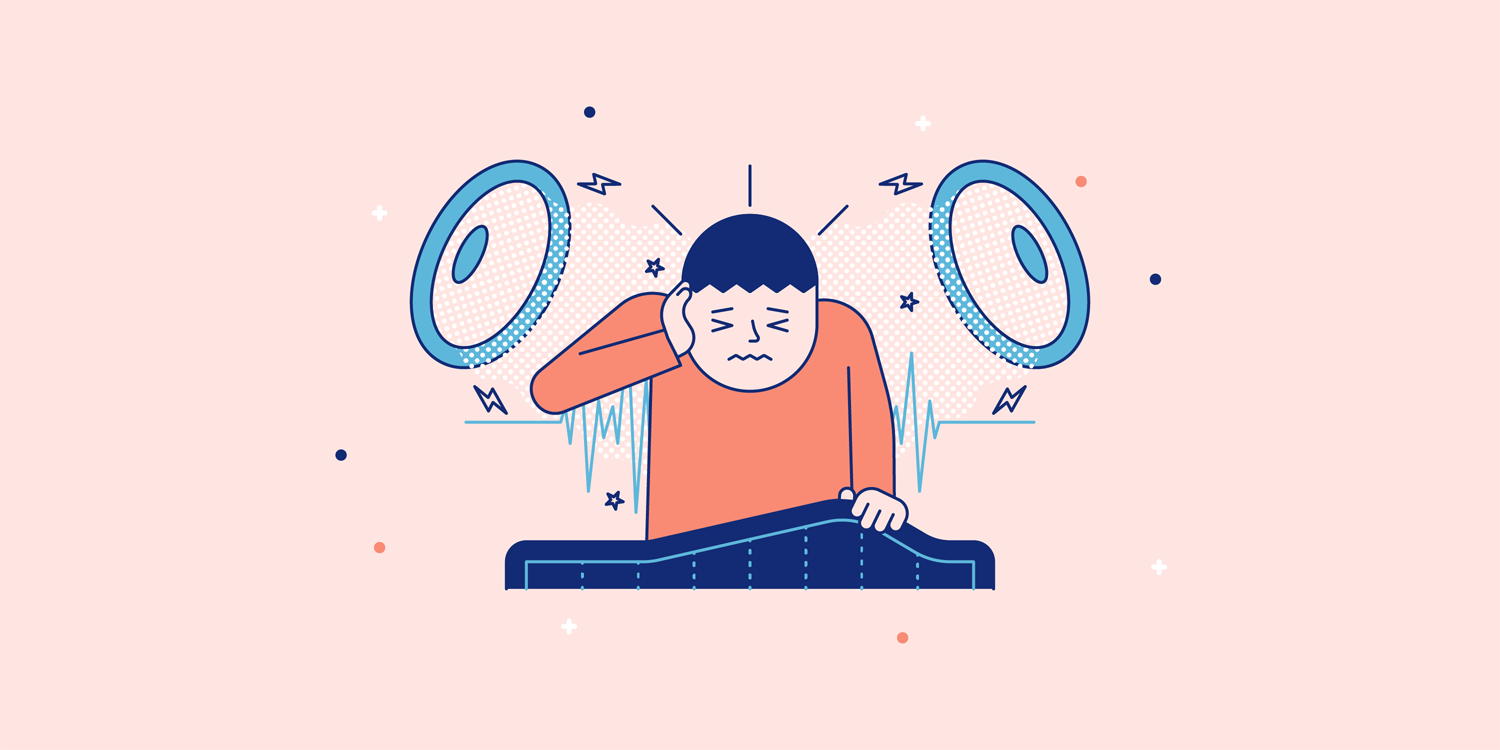 21. Alleviates Symptoms of Menopause
Many women who go through menopause find that they experience sleep disruptions; they also report anxiety and depression. A weighted blanket can help with all of these symptoms, making it easier to get a good night’s sleep.


22. Improves the Mood
Using a weighted blanket can lead to overall improvements in mood because they increase the production of the feel-good hormone oxytocin. Combined with a decrease in cortisol (the stress hormone), this can have a significant impact on a person’s mood.


23. Induces and Improves Sleep
Findings show that people who use a weighted blanket often notice they sleep longer, have fewer disruptions during their sleep and experienced overall improved sleep. There have also been reports that a weighted blanket can help people fall asleep faster. 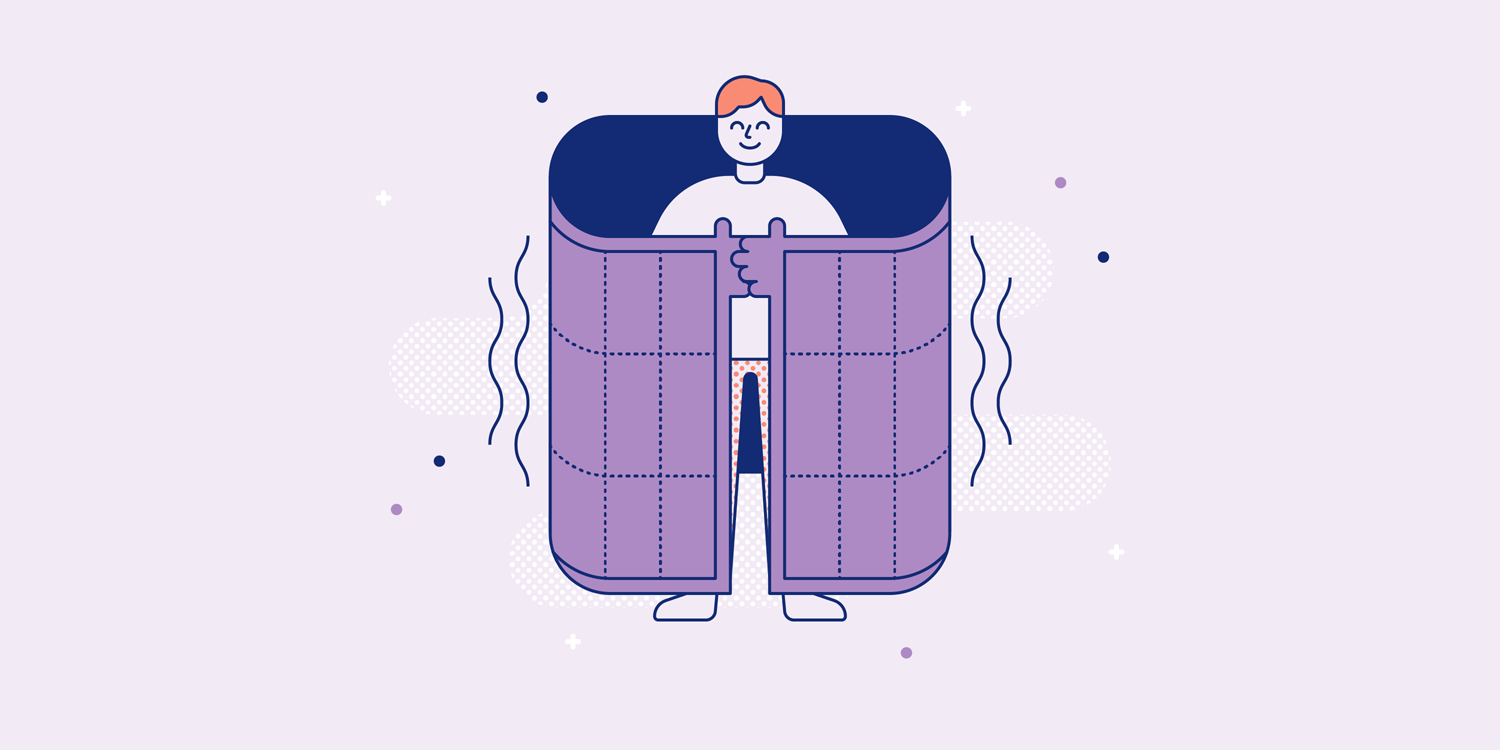 How a Weighted Blanket Works

It’s easy to understand how a blanket might provide a source of comfort — after all, many people enjoy curling up under the covers. It’s common for children to have a favorite blanket they carry around with them as a comfort tool and many adults even own a favored throw blanket.

Weighted blankets take this to the next level. Using the principles behind deep pressure therapy weighted blankets evenly compress the body and induce feelings of calm and safety.

Dr. Temple Grandin first discovered DPT when searching for something to ease the anxiety of children on the autistic spectrum. She wanted to provide something for these patients that didn’t feel confining or restricting and came up with a “hug machine” that applied gentle pressure to the body. When she did this, she noticed a release of oxytocin in her patients.

Using this research, weighted blankets were developed. They give a similar experience to the “hug machine” by lightly pressing on the body and stimulating a similar release of oxytocin.

How to Choose and Buy a Weighted Blanket

The best way to choose a weighted blanket is to determine the right weight for your preferences. It’s generally accepted that the most effective weight is 10 percent of a person’s body weight. So a person that weighs 150 pounds will choose a 15 pound blanket.

Blankets range in weight from 10 to 20 pounds and the price will vary slightly depending on the weight. Many companies fill their blankets with plastic poly pellets or glass beads, but we recommend polyester microbeads for maximum comfort.

Choose a weighted blanket that is breathable, allows for air-flow and has a comfortable outer layer. 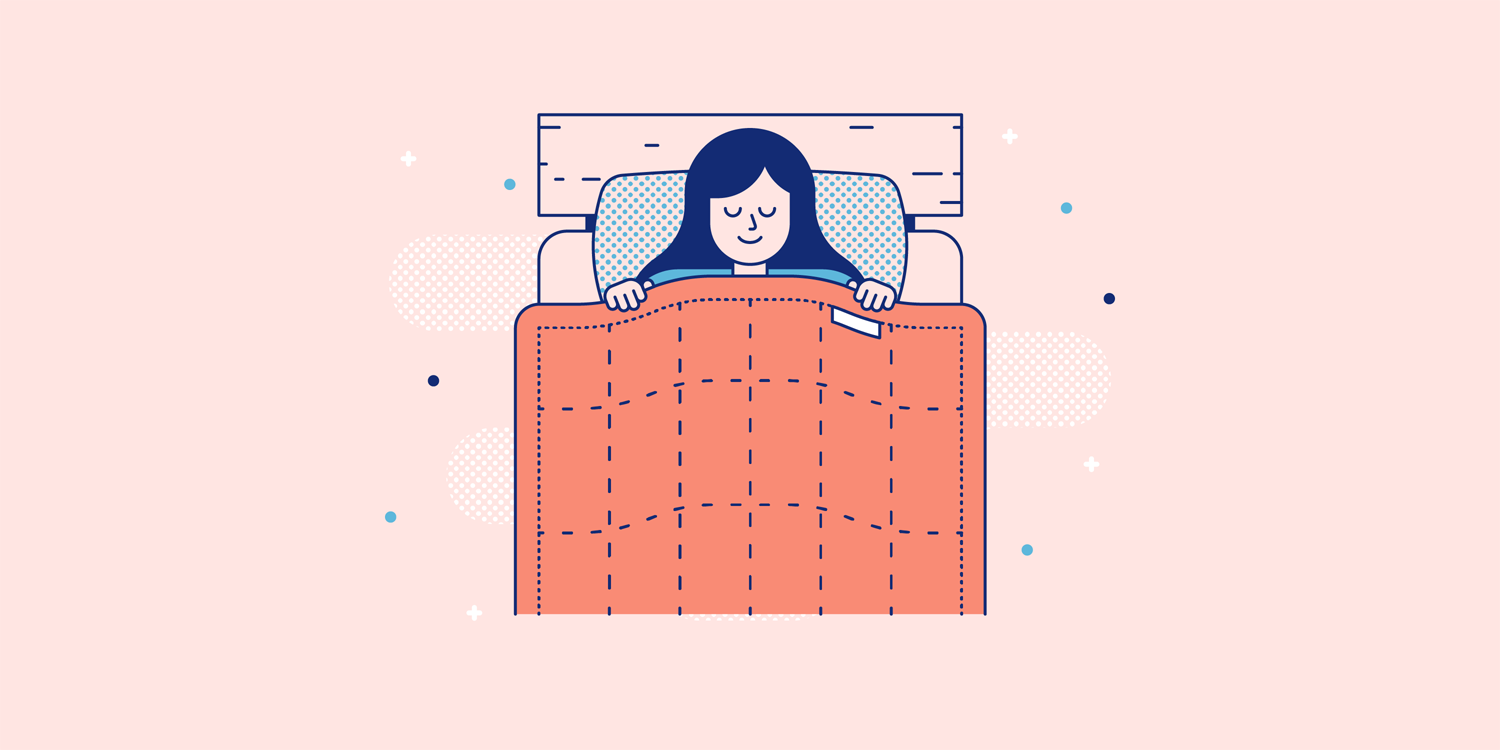 How to Use a Weighted Blanket

The user should ensure the majority of their body is covered, starting at the neck down to the toes for maximum benefits. This will result in an even distribution of weight and allow the blanket’s calming effects to take place.

Weighted blankets have many uses and can provide numerous benefits for those suffering from conditions like anxiety and pain. They can also be helpful for those who are experiencing sensory issues or who are on the autistic spectrum.

When using a weighted blanket, it can be helpful to include nice soft sheets and a fluffy pillow to round out the perfect, cozy sleeping situation.

Choose between Haven, Repose, or our Upholstered Bed Frame for a warm bedroom look.

Want to customize your position for ultimate comfort? Try one of our adjustable frames.See all frames

If you have a frame at home, make sure you use a firm, non-spring foundation or a bed frame with slats that are less than 4 inches apart. Any other kind of box spring or bed frame won't give your foam mattress the support it needs. We also don't recommend putting your mattress directly on the floor.